Selecting a stand (erf) for a Contemporary House

Selecting a stand (erf) for a Contemporary House

A common concern of our clients is when given a choice of several stands, what do they have to look for if they want to build a contemporary house?

(Or even a traditional home.)

We maintain that in the southern hemisphere the easiest stand to work on is a south entry stand.

If you are very lucky it has a slight slope to the north, with nice views towards the north.

The advantage of this is that you can keep the building close to the southern border, preferably right on the building line (set back) and create a pleasant private garden on the north side, with indoor/ outdoor living typical of contemporary houses.

Another advantage is that you can position the entrance to the house close to the center of the building, which reduces the area required for passages, both upstairs and downstairs, which is also typical of contemporary homes. 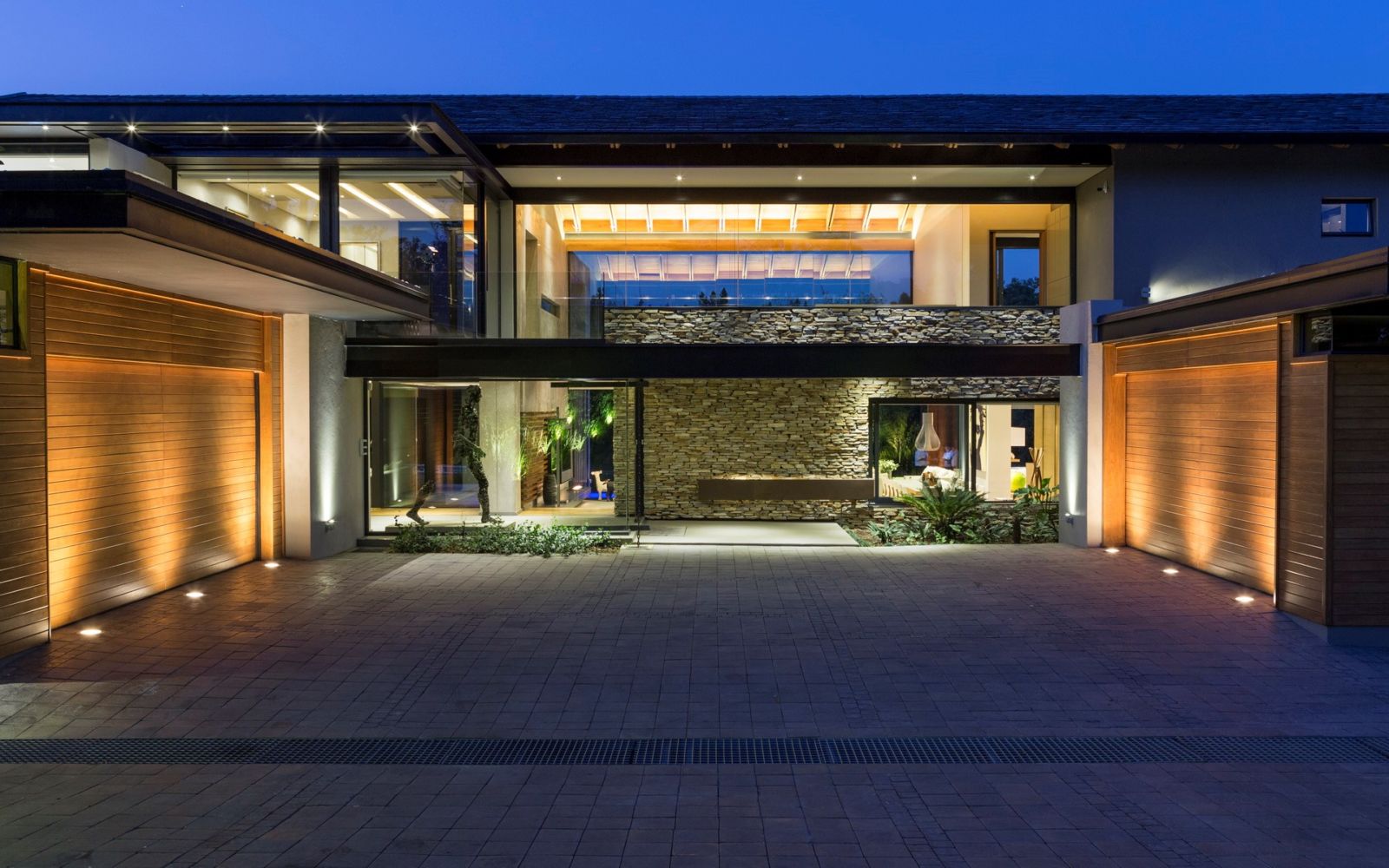 We emphasize NORTH in the southern hemisphere, obviously, it is the opposite in the northern hemisphere. We would then open up the northern facade as much as possible to let in light and sunshine in winter, with sun control to avoid overheating during the hot months.

Sun control uses the sun path to allow the sun into the building only during the cold months.

East facing windows can be used to some extent. It gets hot in the summer mornings, but it is nice to get morning sun into bathrooms and the kitchen or breakfast room.

If you have cold winters in the southern hemisphere, care must be exercised because a south-facing window loses heat all day and night during winter. So, if you are using large south-facing windows it is recommended that double glazing be used.

West-facing windows are best not used at all and a view to the west especially is problematic as the afternoon sun bakes that side of the building in summer, while in winter the sunlight is limited.

Now we did not find our hypothetical south-entry, north-facing stand for the southern hemisphere (or vice versa for the northern hemisphere): Let’s look at the other options:

These are difficult on a small stand as the driveway is going to eat into your garden space. If you want your garden on the north side, it will result in a long driveway if you want to connect the garage to the house. On a bigger stand, it is not important as you may even be able to drive around the house and put the garages and entrance on the south side. 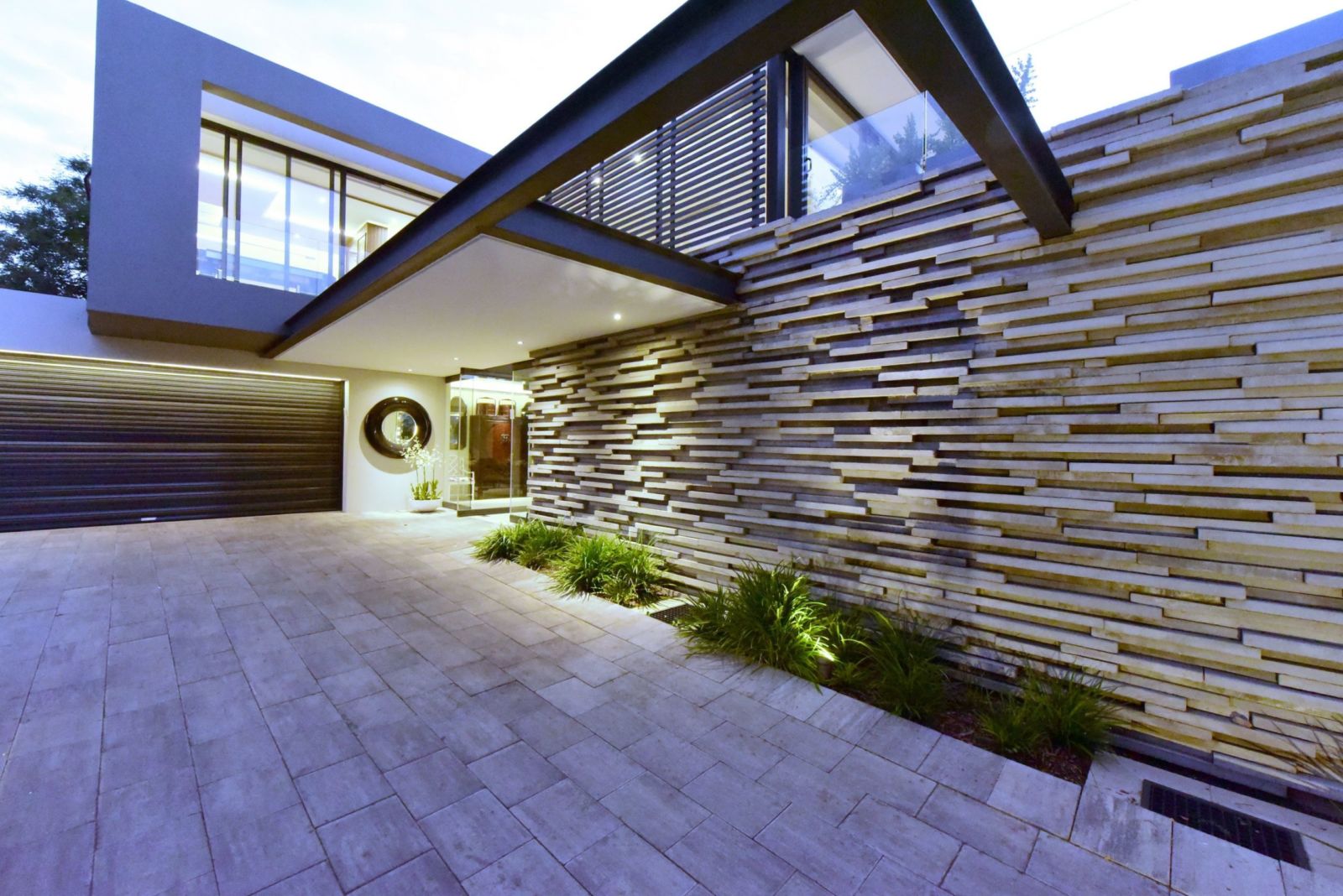 Other important factors when Selecting a Stand:

If it is in an area where the prices for existing houses are high, a well designed and built house will achieve good resale value. However, to achieve a price higher than about 10% over the highest selling price in an area is often difficult.

The value of an area is determined by many factors, such as good schools, shopping centers within a reasonable distance, access to highways and areas of employment, incidence of crime, etc. The value of a leafy suburb with well-maintained sidewalks and properties must not be underestimated.

The shape of the stand:   The actual shape of the stand: too much of an oblong shape is problematic as a stand with a limited width east to west will limit your amount of northern exposure. We had to resort to solutions where we created a U-shape with the open end facing east to give two north faces.

On the other hand, if the stand is very shallow north to south you are going to have the north side of your house right up against your neighbor’s backyard.

Restrictions: What are the restrictions in the Title Deed, the Town Planning Scheme for the area, and if in a private estate, their restrictions?

Views: A good view may add a lot to the value of a residence, while a not-so-pleasant view may adversely affect the future selling price.

One thing to remember, according to the courts a view is a privilege, not a right; be careful about where your neighbor may position his house as it may block your prize view. 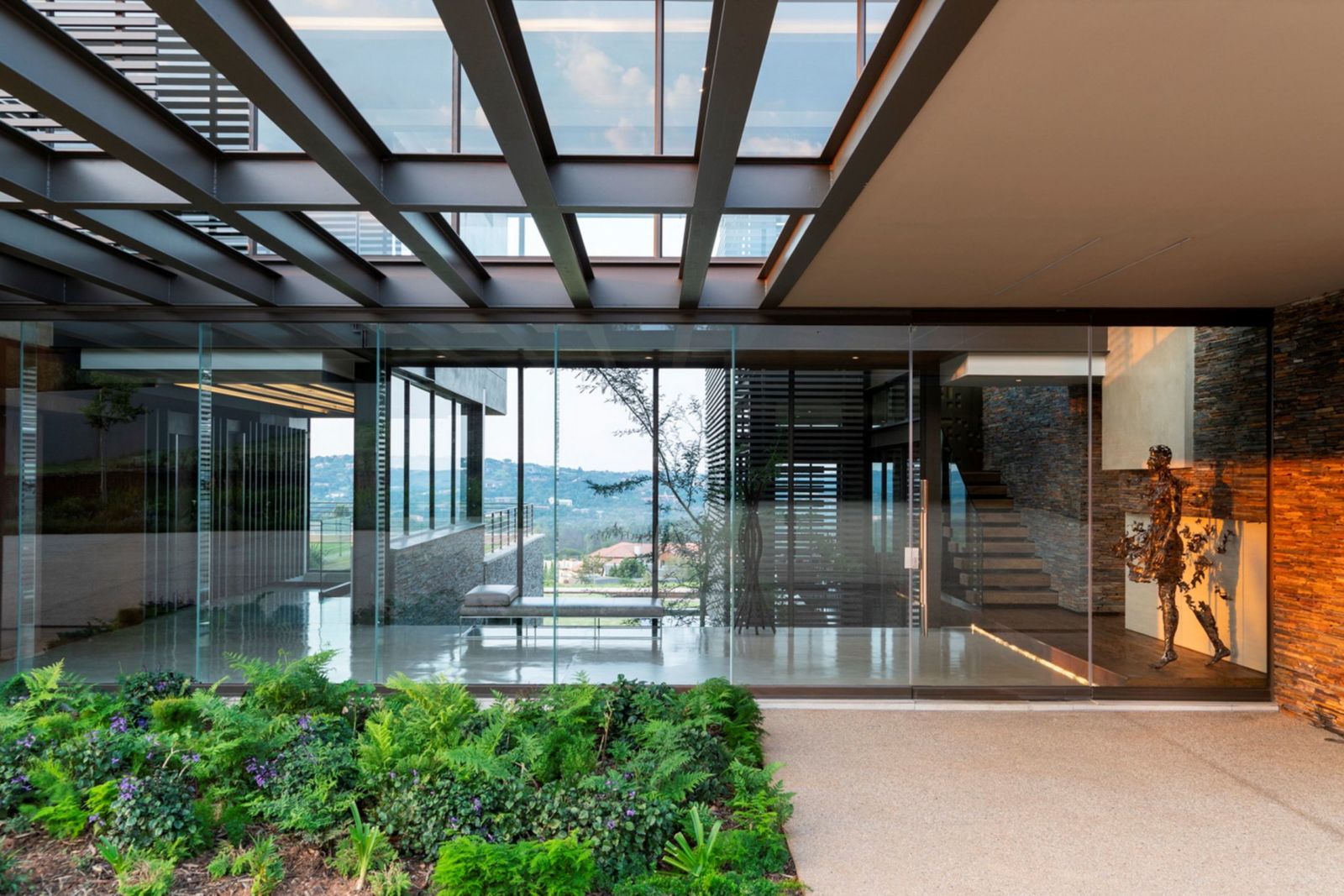 Soil types:   The best soil to build your new contemporary house on is stable soil, not too sandy, nor hillwash or heaving clay so that special foundations are not required.

Typical soil types that require extra work are collapsible soil, clay or very soft soil. even if it is not collapsible, hillwash which often contains either collapsible or clay elements and dolomite soils.

If the soil is underlaid with rock not too deep down, often the easiest option is to dig down to bedrock and put the foundation on the rock.

However, if there are different types of rock you’ll still need reinforcing, and especially if there are areas where there is also soil between the rocks.

Collapsible soils: Good for planting peanuts, not so good to build on.

If the soil feels soft underfoot it can easily be collapsible soil – that is when you wet the soil and put some weight on it and it will suddenly compact quite dramatically.

Here you either have to dig the soil out up to one and a half meter, then re-compact in layers while keeping it damp, or use a raft foundation.

Heaving clay: Soil that contains a lot of fine clay particles, commonly found in low-lying areas, is problematic and will at times require heavily reinforced foundations, most often a raft foundation and precautions against water penetration into the soil near the building. If you see the typical plants growing in a vlei area, you can expect clay soils as it retains water well, which these plants require.

Dolomitic soils: In dolomite areas, it is recommended that several test holes are done, usually at least 20 meters deep to detect any underlying sinkholes before planning/ construction starts.

Here again, the foundations will be extensively reinforced, and it is imperative to avoid water ingress near the building; stormwater needs to be channeled away and flexible connectors need to be used on all sewer and water pipes to prevent leaks under the building.

High water table. This is more difficult to detect, but is quite common where there is a solid rock underlying shallow soils.

Usually it is not too serious a problem as agricultural drains can be used to drain the water: If you have a big enough stand the water drained can be used to form a natural pond. 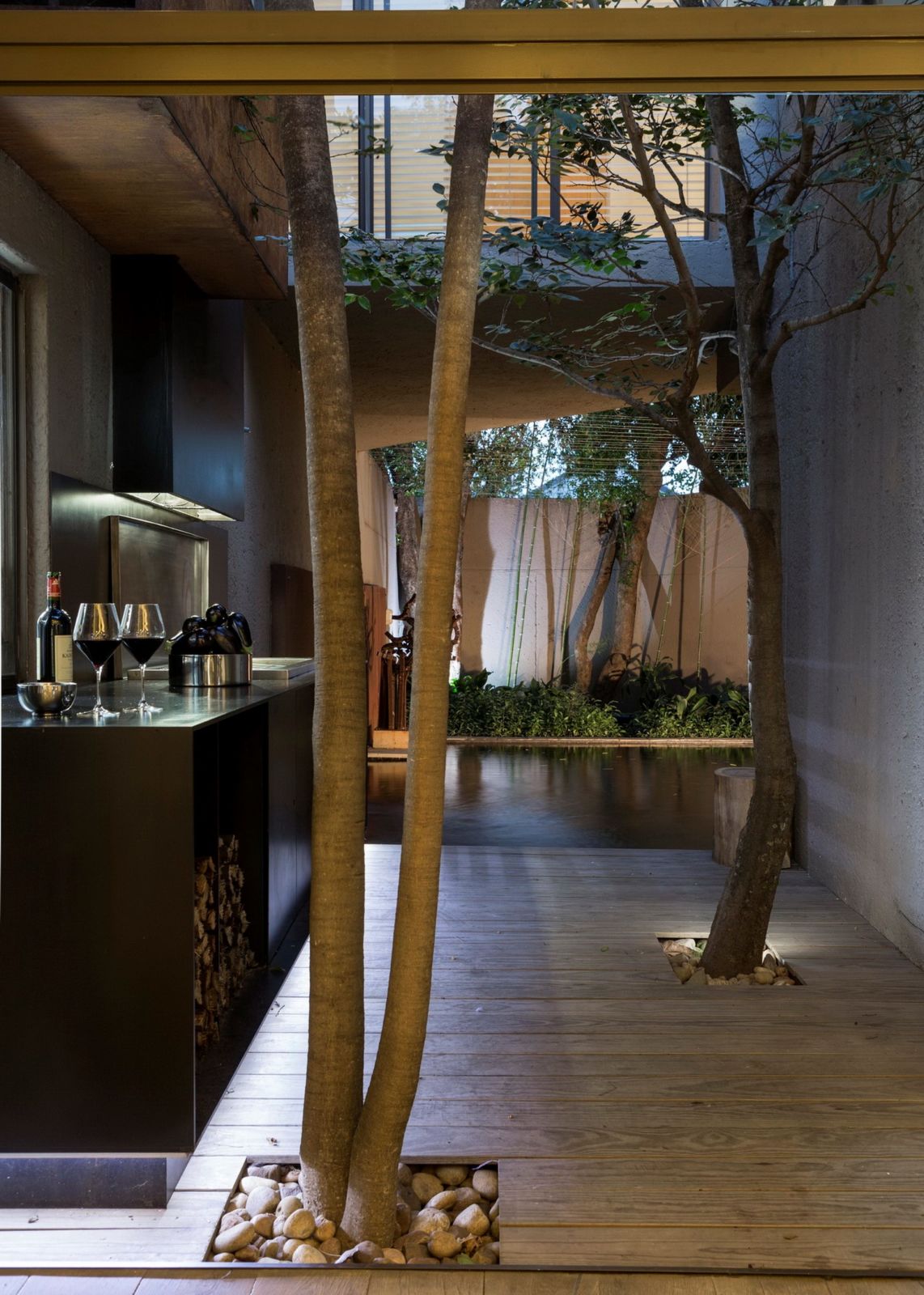 However, if you have trees which are on the undesirable lists, ie. invasive trees or trees with an aggressive root system like the Tipuana (Tipuana tipu), Belhambra  (Phytolacca dioica)  or Australian Flame (Brachychiton acerifolius) near the building, it may need to be removed.

Many indigenous trees can be grown within a meter from the building if you do not have problems with the soil quality that makes it undesirable.